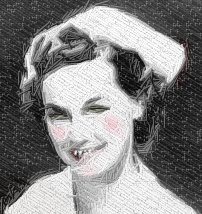 Welcome to The Nurse Diaries. Do you fancy a fantastical adventure that whisks you into a horrid, foul-mouthed landscape of violence, murder, mayhem and DIY trepanning? If so this one’s for you, a grand tale set in the Cambridgeshire fens, Brighton, Middlesbrough, Devon, across the Scottish border into East Lothian, and Dieppe in France.

Welcome to The Nurse Diaries – The Life and Times of a Brighton Serial Killer, my black comedy thriller. This is The Nurse’s story, told in her own words by me, her alter-ego.

Being locked up is enough to send anyone mental-crazy. Luckily The Nurse was mental-crazy long before she was jailed. A serial killer of monstrous proportions and considerable skill, The Nurse has spent half her life in a nuthouse, the rest trepanning the fuck out of people’s skulls with varying degrees of success.

This is her world. It is not a nice place. It is awfully sweary and bloody. But it is never dull.

Join The Nurse as she escapes from the Secure Unit she’s imprisoned in and returns to Brighton for the killing spree of a lifetime. Fall truly, madly and deeply in love with a British nutter of the finest order. Meet the gang of dangerous loons she gathers around her. Follow their thrilling escape. And find out what ultimately happens to the worst serial killer the British Isles has ever seen.

Go on. You know you want to.

Buy The Nurse Diaries on Amazon

You can buy The Nurse Diaries here on Amazon, either paperback or Kindle ebook.

Here’s an excerpt from the book

“The Nurse is poised, a carrot-sized joint dangling from her lip, strong arm raised high above the man’s head. The orange street lamp’s glow casts deep shadows onto his face. His eyes frantically signal panic. He is unable to free himself, tied to a chair with a pair of fluffy pink handcuffs she nicked from a gay sex shop in Kemptown.

The victim’s eyes bug out. He struggles violently. The Nurse’s trepanning blade scythes down, but before it reaches his scalp a policeman crashes through the door of the flat, followed by several others, like something from a black and white Keystone Cops movie. Get her, lads. A meaty hand wrenches back The Nurse’s arm, forcing her to drop the knife, and the rest of the rozzers jump on her, bringing her crashing to the ground.

She is well and truly fucking nicked.

The neighbours in the other flats peer out of their doors, amazed, as The Nurse, a respectable young woman who has done nothing nastier than ‘keep herself to herself’ as far as they’re concerned, is manhandled down the stairs of the house on Denmark Terrace in Brighton, and shoved – beefy copper’s hand firmly on top of her head – into the back of a police car. And that’s that. What a sorry end to what was steadily becoming a glittering serial killing career.”

Here’s The Nurse’s Facebook page. She can’t always be arsed to keep it up to date, but you can scroll down it to discover all manner of thrillingly violent adventures. Right now she’s mired deep in the ‘can’t be arsed’ stage.

You can contact The Nurse via her unwilling-but-too-scared-to-say-no alter ego, Kate, on kate@wordcat.co.uk.